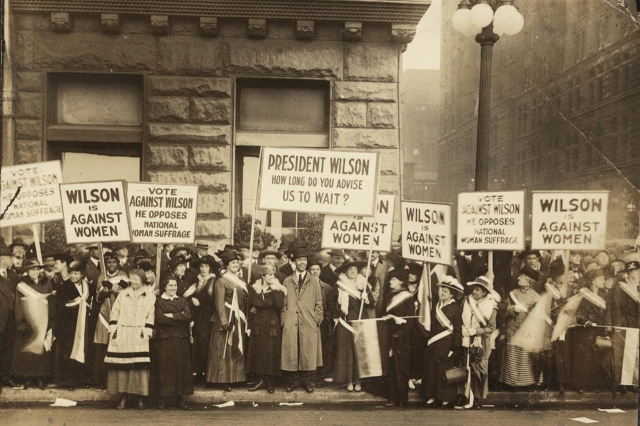 One hundred years ago, in 1920, American women won the right to vote with the ratification of the 19th amendment to the United States Constitution. The suffrage campaign had been neither easy nor straightforward. In 1915  Massachusetts voters in a state referendum on the issue soundly defeated women’s suffrage—only males voted of course, and they cast 68% of their votes against the measure. Arlington men voted 1410 (no) to 857 (yes).

Arlington had strong suffrage and anti-suffrage organizations with women in the vanguard of both. The Arlington’s Woman’s Club (AWC), the town’s powerhouse women’s organization with hundreds of members had a record of accomplishments  from the establishment of the Arlington Visiting Nurses Association, to successfully lobbying the state for prison reform.

AWC provided the leadership–the leaders of both factions  became AWC Presidents– for both the anti-suffrage and the pro-suffrage  groups, but the “battle” was decidedly sedate and middle class featuring teas, political plays, and lectures. After the amendment passed  In order to accommodate a much-enlarged electorate, Arlington town meeting changed from an open form to a representative one. The 1921 Town Meeting was the first to have both precinct and women representatives, and they’ve been there ever since!

Ida Robbins (eldest Robbins sister) was a member of the very first voting group of women-voting Town Meeting members after the 19th Amendment passed – but she had been anti-suffrage before then.

You may wonder why anyone would not want the right to vote.  Many women in Arlington already had power within the cultural spheres of their women’s groups so why would they wish to show up at smoke-filled back rooms with spittoons dominated by men, when their methods were based on female solidarity over which they had control.

Related  Library books on this topic which you can reserve…

Forging the franchise : the political origins of the women’s vote by Dawn Langan Teele

The woman’s hour : the great fight to win the vote by Elaine F. Weiss

Thank you to local historians, Doreen Stevens and Oakes Plimpton, for information used in this blog post.

This entry was posted in Books, Local History, Uncategorized and tagged suffrage. Bookmark the permalink.