We’re meeting a week early this month! Join us on Wednesday 10/24 for a discussion of Outlaw Marriages : The Hidden Histories of Fifteen Extraordinary Same-Sex Couples by Rodger Streitmatter.

“For more than a century before gay marriage became a hot-button political issue, same-sex unions flourished in America. Pairs of men and pairs of women joined together in committed unions, standing by each other “for richer for poorer, in sickness and in health” for periods of thirty or forty–sometimes as many as fifty–years. In short, they loved and supported each other every bit as much as any husband and wife.

Among the high-profile couples whose lives and loves are illuminated in the following pages are Nobel Peace Prize winner Jane Addams and Mary Rozet Smith, literary icon Gertrude Stein and Alice B. Toklas, author James Baldwin and Lucien Happersberger, and artists Jasper Johns and Robert Rauschenberg.”

There are still copies of the book at the circulation desk here at the Robbins Library!

Hope to see you there! 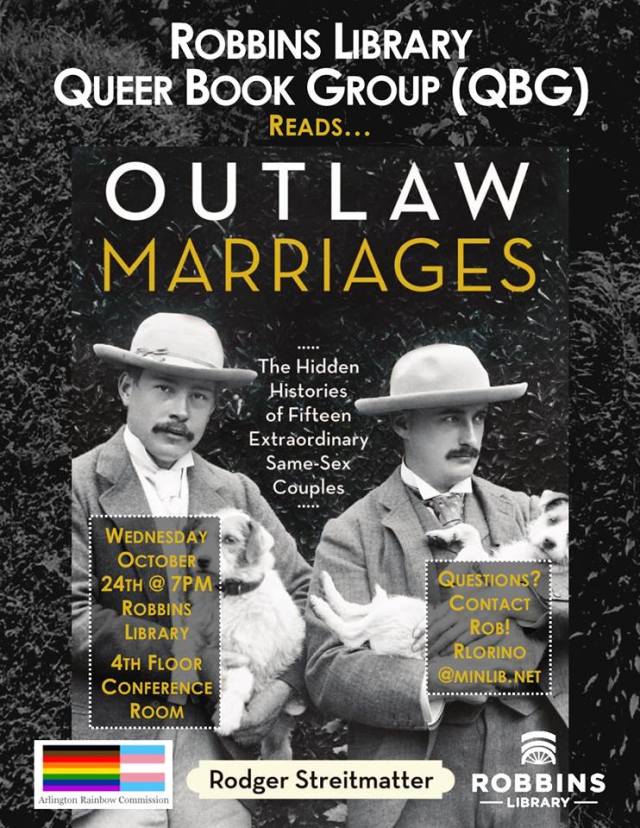