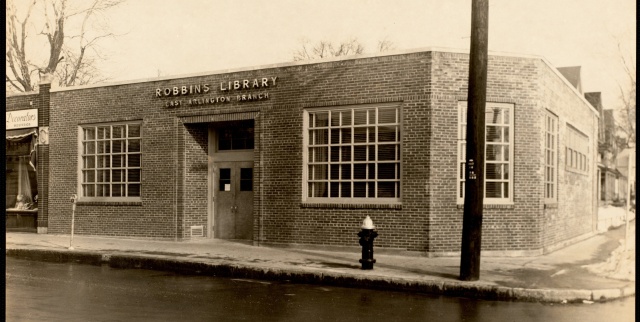 The first purpose-built structure for the East Branch of Robbins Library opened its doors in December 1952 at the corner of Massachusetts Avenue and Cleveland Street, the site of today’s Edith M. Fox Library and Community Center.

Local historian Richard A. Duffy, a board member of the Arlington Libraries Foundation, is today’s guest blogger.  This is Part 2 of a two-part series honoring the 100th anniversary of the Fox Branch Library in 2017.  To read Part 1, please click here.

If the first thirty-plus years of the East Branch library’s existence were characterized by the frustrations of trying to do more with less, the following three decades rapidly made up for lost time.

In 1950 the East Branch moved from the Crosby Elementary School basement into a single rented storefront located in part of the same stretch of Massachusetts Avenue as the current Edith Fox Branch Library.  “Rushed to death,” was how Library Director Lucinda Spofford described opening day at 175A Massachusetts Ave., as 460 books were borrowed in the space of five hours.

It was a humble arrangement, but to use real estate parlance, the value proposition of “location, location, location” was never truer.  Having plate glass windows in East Arlington’s commercial center enabled staff to mount attractive book displays, and it wasn’t long before passers-by became library-card holders.  Indeed, after relocation, the East Branch boasted by far the greatest year-over-year increases of the three library locations in Arlington, in terms of new patron registrations, and in the circulation of materials in both the adult and “juvenile” categories.

Fueling patron growth at the East Branch was the surge of children of the post-World War II “Baby Boom.” It wasn’t just the overall high birthrate, but also the development of two massive tracts of land between River Street and the Alewife Brook.  The Campobasso farm and greenhouses gave way to Menotomy Manor, which welcomed its first residents in 1950 as a veterans’ family housing development.  Soon followed a series of new streets named for women’s colleges, formerly the site of Moore’s farm, with privately owned homes.  East Arlington was soon almost fully built-out. 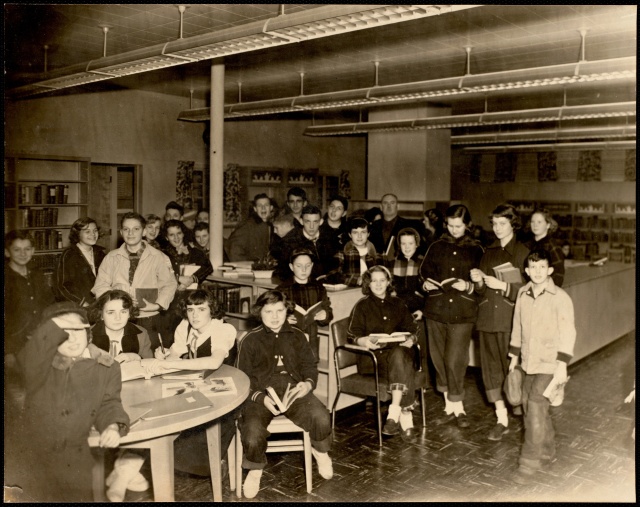 It was clear that the storefront home for the East Branch would not be satisfactory even in the medium term.  But solving for something better posed a challenge.  Unlike construction of the freestanding Vittoria Dallin Branch Library a dozen years earlier on the site of a former Arlington Heights fire station, the town did not already own a conveniently located building parcel in East Arlington.

Fortunately, Town Meeting in 1951 readily voted to purchase the storefront already occupied by the East Branch, plus two adjacent ones, to create a coherent, roomy and purpose-built library space.  Acquisition costs aside, the vote to remove property from the tax rolls was never taken lightly.  Once underway, the building project was concluded in a matter of months.  As East Branch Librarian Evelyn Colcord wrote: “during the closing days of 1952, the branch was literally transformed from the ‘Ugly Duckling’ to the ‘Beautiful Swan’ of the Robbins Library system.”

“Beautiful Swan” does not come to mind when the 1952 library building is viewed today.  The exterior architecture was utilitarian to put it kindly (I once wrote that it had “all the allure of a penitentiary”).   But through the eyes of patrons and staff of the era, the austere new building conveyed a much longed-for sense of solidity, permanence, and confirmation that East Arlington truly “counted” when it came to significant public investment. 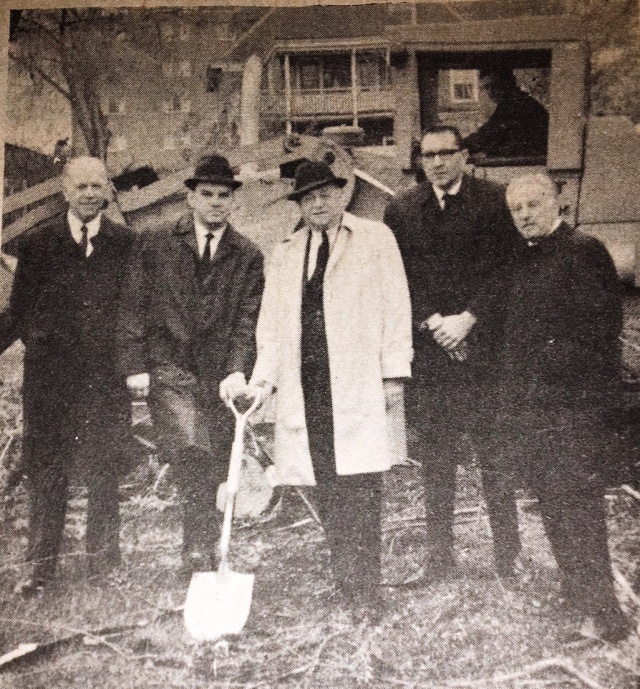 Groundbreaking for the addition to what would be renamed the Edith M. Fox Branch Library in 1969 reflects a time when it was considered normal to exclude the library director as part of the endeavor’s official leadership.  Thus, we note the absence of not only Library Director Judith E. Stromdahl, but of any women in this image.

This facility would surpass itself by 1969, when the unabated success and growth East Branch services led to renovation and addition that created the present building, named in honor of the late Edith M. Fox, for her bequest of almost $200,000 at her death in 1965 (worth more than $1.5 million in today’s dollars, adjusted for Consumer Price Index inflation).  The branch gladly took up temporary quarters in two adjacent storefronts at 112 and 114 Massachusetts Ave. (one for children’s services, the other for adults) while its new home quickly took shape. 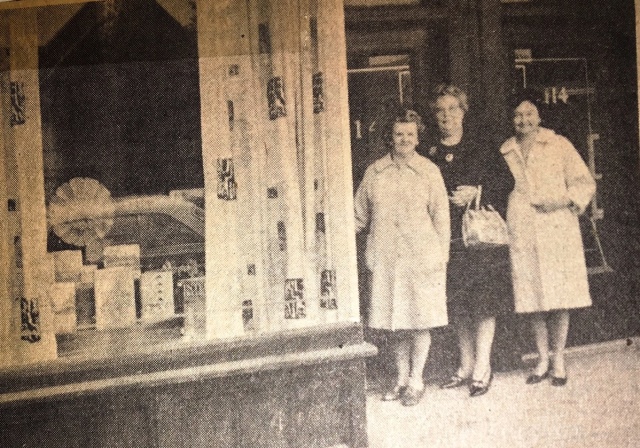 This newspaper photograph of the temporary quarters of the Fox Branch during the 1969 re-build gives an idea of how the 1950 storefront branch location would have appeared.  Pictured from left to right are:  Mrs. Evelyn Colcord, East Branch librarian; Miss Judith Stromdahl, Robbins Library director; and Miss Marilyn Kenney of the East Branch staff.

The hopes of 1969 soon became the deep worries of the 1970s, as Massachusetts and the nation were gripped by over a decade of high inflation and unemployment, along with fuel shortages.  There was unrelenting pressure to maintain municipal services at steady levels.  Suburban commercial areas were suffering as new shopping malls siphoned-off customers at an alarming rate. Residential property tax hikes in this context created a backlash vote in 1980 known as Proposition 2½, which capped municipal budget increases as a matter of Massachusetts law.  The libraries were among the first places where the resulting squeeze on services was felt by ordinary residents.  Still, Arlington was proud to say that, unlike other communities, it had not needed to close either of its two branches.  But staffing grew ever tighter, and other cutbacks created a perilous sense about the future.   By 1989, the 20th anniversary of the Edith Fox Branch Library building, its doors were closed indefinitely.  It became a hole in the heart of the East Arlington community. 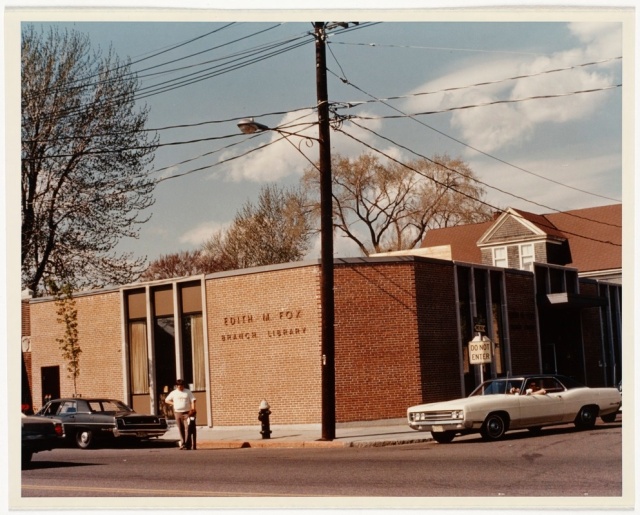 The completed Edith M. Fox Branch Library was considered a tremendous improvement over the previous East Branch building, but as it approaches its 50th anniversary in its present form, changes feel very much overdue.

In 1995, tax-override funding and a new operating model for “the Fox” to serve as both a branch library and a community center enabled re-opening the facility on a limited basis.  (Branch library services permanently ended in the Heights, but the former Dallin Branch building today serves a community role as home of Arlington Community Media and its cable television production studios.)

Key to the success of the Fox Branch re-opening was unprecedented grass-roots involvement by the neighborhood.  Volunteerism flourished in many forms.  The Little Fox Shop’s profits delivered critical private dollars.  Yet by 2003 closure loomed once again due to a failed tax override vote.  It was a confusing campaign, because to the casual observer, the future of the Fox Branch had already been “permanently” taken care of in the earlier override.  “How could the Fox be imperiled again?”, many wondered.

Without delving in to the intricacies of the town budget, it was going to take a creative public-private partnership to keep the Fox Branch open three days a week.  The groups of volunteers who swiftly undertook an array of activities and advocacy fulfilled their part of an agreement with the town to supply one-third of the funding for the Fox, and evolved into the vibrant Friends of the Fox Library non-profit entity.  A better organized and communicated tax-override campaign in 2005 found favor with voters and restored more public funding to the Fox.  When the branch eventually resumed Saturday open hours, the joy was palpable.

Today the Fox Branch and community center continue to grow from strength to strength, and a building designed to meet modern needs (to include, not least, full accessibility for disabled persons) is in the formal architectural discussion phase. This initiative comes under the umbrella of the “Re-imagining Our Libraries” campaign that will benefit both Robbins Library and the Fox Branch.  That this should be taking shape in the centennial year of the Fox Branch Library seems to be the best 100th anniversary gift imaginable. 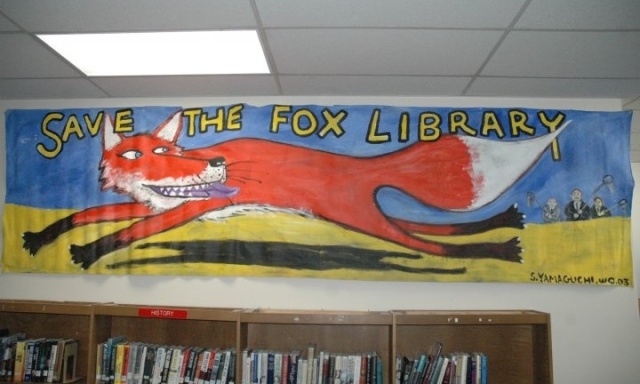 This entry was posted in Local History. Bookmark the permalink.