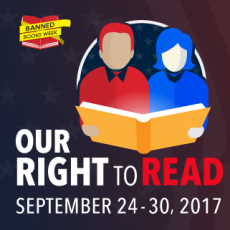 Once again, the Books Change Lives/Books Save Lives jar was the star of our Banned Books Week display table. We asked a simple question – “What book changed your life?” and you answered! Some people wrote a title, or a title and author, but some wrote additional comments, which are included here as well.

Note: A number in parentheses after a book indicates that it was mentioned more than once.

Other responses to the question “What book changed your life?”

As you can see from the comments, books have changed people’s lives in many ways: by showing the power of the written word, by helping readers realize they’re not alone, by enabling people to learn a new set of skills, by stretching the imagination, by offering empathy.

These books are all over the map: from picture books to adult novels and nonfiction, poetry to how-to, teen novels to classics (and some classic teen novels). The diversity of the list just goes to show the importance of having a wide range of reading materials available to readers of all ages; you never know what book will change your life.