Posted on September 27, 2017 by Linda Dyndiuk, Head of Adult Services 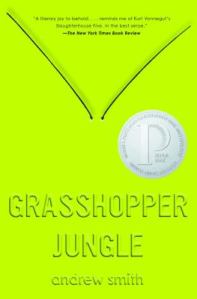 The next meeting of the NSYA Book Group will be on Wednesday, October 18 at 7pm in the 4th floor conference room. We’ll be discussing Grasshopper Jungle by Andrew Smith. Here’s the description from Goodreads:

“Sixteen-year-old Austin Szerba interweaves the story of his Polish legacy with the story of how he and his best friend , Robby, brought about the end of humanity and the rise of an army of unstoppable, six-foot tall praying mantises in small-town Iowa.

To make matters worse, Austin’s hormones are totally oblivious; they don’t care that the world is in utter chaos: Austin is in love with his girlfriend, Shann, but remains confused about his sexual orientation. He’s stewing in a self-professed constant state of maximum horniness, directed at both Robby and Shann. Ultimately, it’s up to Austin to save the world and propagate the species in this sci-fright journey of survival, sex, and the complex realities of the human condition.”

It’s even weird than it sounds. This is sure to be a good discussion!

Copies are available now at the front desk.

The Not-So-Young Adult Book Group is a book discussion group for adults in which we read books written for teens. Newcomers are always welcome!