June’s Readalike: Saints for All Occasions

J. Courtney Sullivan’s fourth novel, Saints for All Occasions, follows The Engagements (2013), Maine (2011), and Commencement (2009). In all four novels, Sullivan carefully crafts believable characters and intricate plots that often have to do with relationships and family secrets. Saints for All Occasions, set in Ireland and Boston from the 1950s to the present, is a stellar novel about the Flynn sisters, Nora and Theresa, and the way their lives diverge and come together again. It’s in high demand, so while you’re waiting – or if you’ve already read it and searching for something similar – here are some other books to try.

The Boston Girl by Anita Diamant (2014): Diamant is an accomplished novelist, and The Boston Girl had a long waitlist when it was first published too. Addie Baum is born in 1900 and grows up in a poor immigrant family in Boston’s North End; she tells her story to a granddaughter in 1985, so it is also the story of how the world has changed in that time, particularly for women.

The Visitors by Patrick O’Keeffe (2014): Two Irish families, the Dwyers and the Lyons, are entangled from one generation to the next, connected even as they scatter and settle. Library Journal writes, “O’Keeffe paints a picture of self-centered introspection, Irish gloom, and the ironic repetition of events from generation to generation.”

We Are Not Ourselves by Matthew Thomas (2014): Born in 1941, Irish-American Eileen Tumulty aspires to the American Dream, but finds that it continues to slip from her reach. Reviews called it “epic and emotionally draining” (Library Journal) and “powerful and significant” (Publishers Weekly).

Instructions for a Heatwave by Maggie O’Farrell (2013): A heatwave oppresses London in the summer of 1976, and it is during this time that Robert Riordan disappears one morning. His wife Gretta calls her grown children home to help discover where he went and why, but she knows more than she tells them. Each character narrates part of the story, and the adult children – Monica, Michael, and Aoife – have their own private struggles to manage on top of the family crisis. 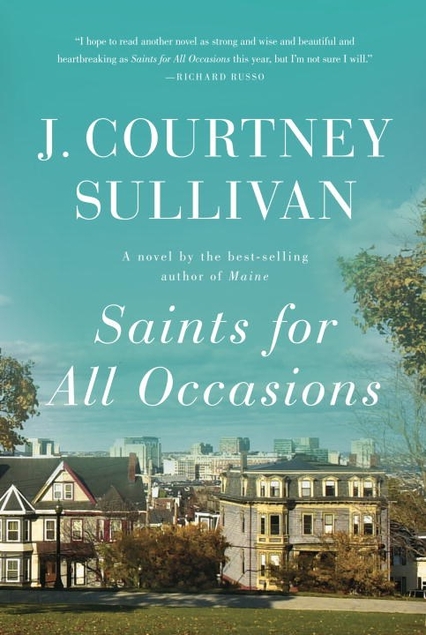 Maine by J. Courtney Sullivan (2011): Ordinarily I wouldn’t recommend another of the same author’s books in a readalike – it’s too much like using a word in its definition – but in this case, it would be remiss not to mention Maine, another story of Boston history and tangled family secrets told by three generations of women. Incidentally, the Robbins Library Book Group is discussing Maine at their July 10 meeting.

Brooklyn by Colm Toibin (2009): Yet another story that begins in Ireland in the 1950s and follows its character, Eilis Lacey, to America. Eilis, lonely at first, begins to make a life for herself, but when her sister dies, she returns to Ireland, and then must decide whether to stay, or return to her life in Brooklyn. This novel was made into a movie in 2016.

The Girls Who Went Away: the hidden history of women who surrendered children for adoption in the decades before Roe v. Wade by Ann Fessler (2006): This nonfiction work is a blend of oral history and scholarly research. A million and a half unmarried women surrendered their newborn babies before abortion was legalized, and Fessler’s narrative – along with some of the women’s own words – brings their individual stories as well as an overarching cultural story fiercely to life, from the women’s powerlessness over their own lives and bodies to their searches for their lost children (and the grown children’s searches for them) years later. Poignant and powerful.

Did you miss the readalike posts from previous months? Catch up here.

This entry was posted in Books and tagged readalike. Bookmark the permalink.

1 Response to June’s Readalike: Saints for All Occasions