May’s readalike: Anything Is Possible 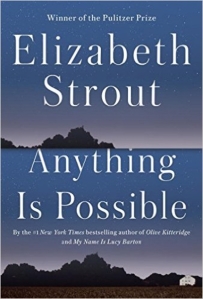 This month’s readalike is the highly anticipated new collection of short stories by Elizabeth Strout, Anything Is Possible. Strout’s other works include the novels My Name Is Lucy Barton, The Burgess Boys, Abide With Me, and Amy and Isabelle, and the collection of linked stories Olive Kitteridge, for which she won the Pulitzer Prize for fiction, and which was made into a miniseries in 2014. All of which is to say, if you’re eagerly awaiting Anything Is Possible, you might try reading (or re-reading) one of the author’s other books in the meantime.

Miller’s Valley by Anna Quindlen (2016): Booklist calls this novel, set in a small town in Pennsylvania in the 1960s, “a compelling family tale rich in recognizable characters, resplendent storytelling, and reflective observations….An appreciative portrait of a disappearing way of life.”

Thunderstruck & other stories by Elizabeth McCracken (2014): These nine stories are unforgettable, poignant, sometimes funny; McCracken observes the world at a particular slant, and her stories are incomparable.

The Illusion of Separateness by Simon Van Booy (2013): The stories of six apparently unrelated characters, spanning time (WWII era to the present day) and place ( Europe to America), turn out to be connected after all, and can be traced back to one man’s act of kindness.

It’s Beginning to Hurt: stories by James Lasdun (2009): Featuring middle-aged, middle-class characters, “This remarkable collection shows what happens when we break through the gauze of everydayness and existential panic hits” (Library Journal).

Unaccustomed Earth: stories by Jhumpa Lahiri (2008): As in her previous short story collection (Interpreter of Maladies) and her novels (The Namesake, The Lowland), Lahiri explores the relationships and gaps between parents and children, husbands and wives, and first- and second-generation immigrants. The first five stories in this collection are unrelated to each other; the final three are linked.

Home by Marilynne Robinson (2008): Set in Gilead, Iowa, in the 1950s, Home is the story of a grown daughter caring for her dying father, and the return of her brother, the prodigal son who has been out of their lives for twenty years.

Stern Men by Elizabeth Gilbert (2000): Ruth Thomas grows up on a (fictional) island off the coast of Maine, near another (fictional) island; the inhabitants are habitually at war over lobster fishing territory. Ruth neither wants to become a fisherman nor go to college, and must chart her own course in this novel of strong characters.

Birds of America by Lorrie Moore (1998): Moore’s stories are tragic, wise, and unflinching: she puts her characters in the worst situations and lets them muddle through. As one character puts it in the story “People Like That Are The Only People Here”: “Pulling through is what people do around here.”

Check out our readalike posts from previous months here.

This entry was posted in Books and tagged fiction, readalike. Bookmark the permalink.

1 Response to May’s readalike: Anything Is Possible