The hitchhiker’s guide to the galaxy – of staff pets

The following blog posting represents many of our staff’s pets.  One of the entries has a mysterious element, so keep any eye out for that one.   Hint  –  it’s not the moss.  Let us know if you figure it out. 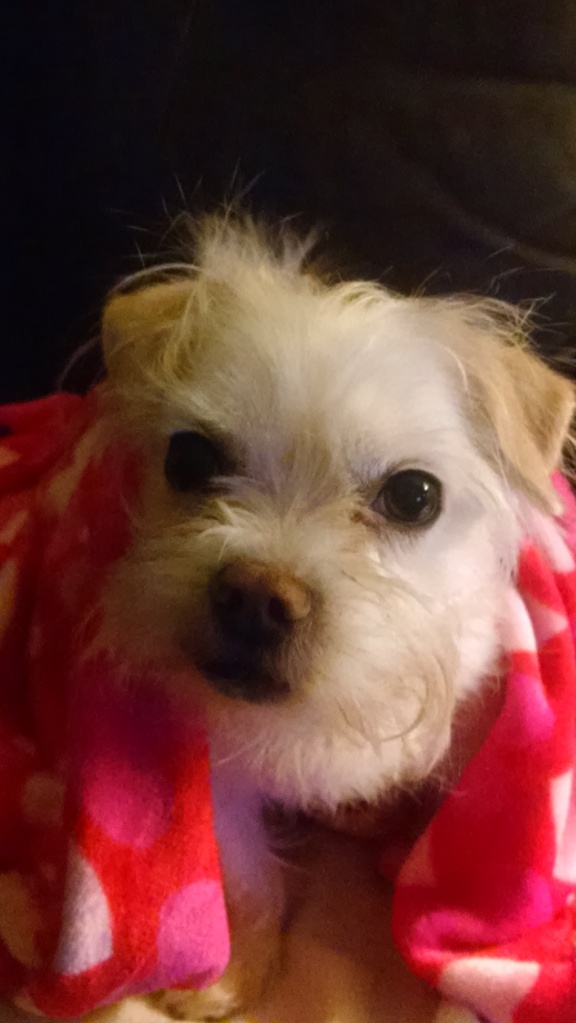 We found him 9 years ago and contacted the town dog officer who had found his owner.  The owner told us  ‘keep him I don’t want him because he keeps running away.’ He then became part of our family.  Scamp is 9 lbs of white fur with a curly tail & big eyes. He loves comfort & always manages to find a soft blanket near his favorite humans. He’s also talented, When anyone sings Happy Birthday, he’ll howl along. He likes to chase teens and growl at their ankles, the highest he can reach.  We can’t imagine life without our Scampy.

My hound Percy in his Fall 2016 back-to-school photo. 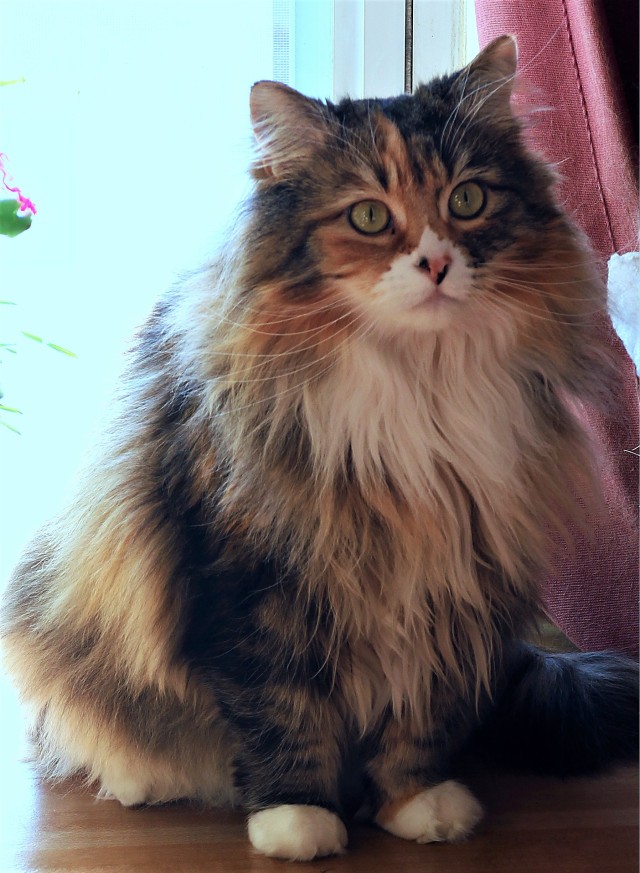 Here’s a picture of Aurora. We adopted her and her sister Fiona in March 2015 when their people abandoned them after getting evicted. Unfortunately her sister died a few months ago from a heart condition but Aurora still has us and we have her to help us cope with this sudden loss.

The one below is the best picture we have ever taken of her.

This is my cat Shippo. We adopted him in 2015 when he was a year old. He can best be described as ‘agressively affectionate’ (coined by a friend)  He loves rubbing his face against people’s faces, using his paws to drink water from people’s glasses, chewing power cords, & getting into places he shouldn’t be in a split second. Sooo lucky he’s adorable.

Second shot shows him climbing into a cabinet while I  am emptying the dishwasher directly underneath. I never met a cat so into people – he follows me all over the house, loves giving kisses, prefers to sit anywhere he can be against my face or head.  He will greet me at the door every time I come home.  It may take him a minute to get used to you, but rest assured you will get kissed and rubbed against until you pet him.  It often feels like we have our very own cat shaped dog. 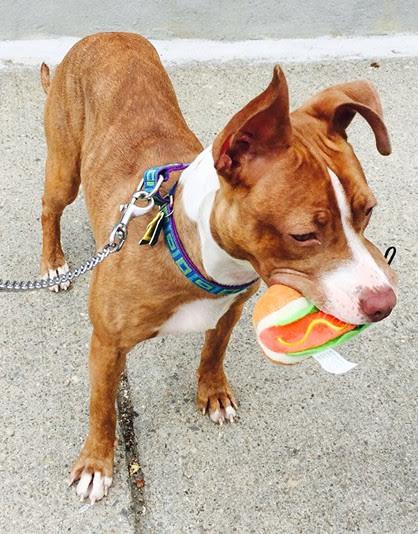 Petri is a 2.5 -year-old American Staffordshire Terrier who was adopted from the MSPCA after she was found abandoned. She came with an array of behavioral problems, but is a quick learner & really enjoys working with trainers. Her favorite activities include eating, practicing obedience to commands, going for walks, & chewing on toys (or unfortunately, shoes.) She is suspicious of other dogs, but is super-friendly and affectionate to people. According to her, every stranger she meets on the street is her new best friend.

Found a good picture of our snake Misha

Here’s the rest of the zoo… 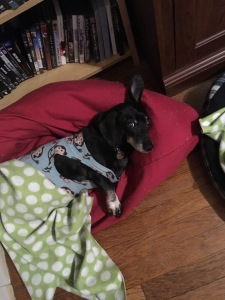 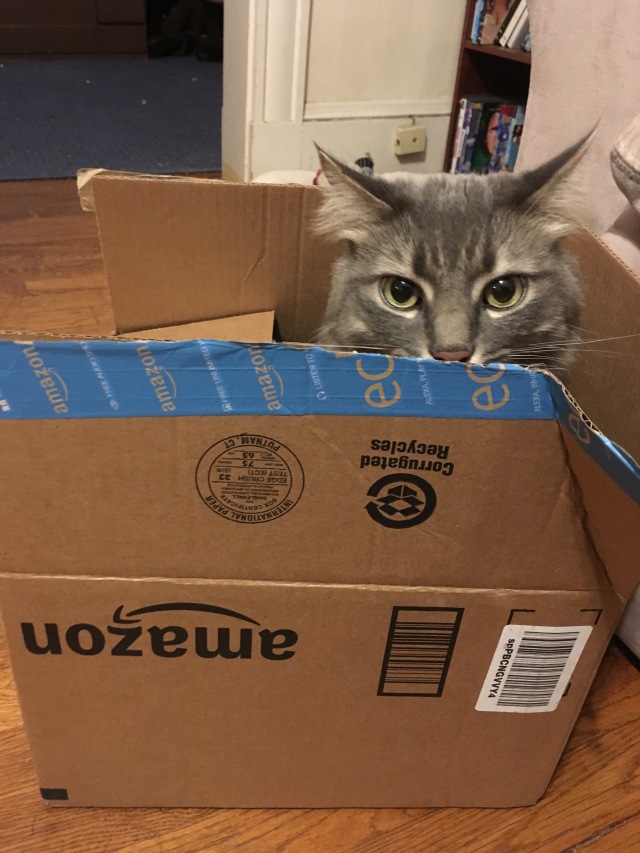 Venus (left) is the most affectionate cat ever.  She loves nothing more than snuggling & getting pets.  Ariadne is a little more reserved but still very talkative, hence her nickname – Aria.  She enjoys catching toy mice and leaving them neatly beside my bed for me to find in the morning.

I became the caretaker of two Japanese Marimo moss balls in October 2016. Their names are Miney and Moe and they get along rather well. The only command they know is “stay” and their favorite activities are floating and eating.

This is Henry, my beautiful 2 year old Abyssinian.  He is as sweet as he is beautiful – and devlish.

Fife is posed on a chair

We adopted Willie from Nevins Farm

She is a 6 year old Ragdoll. 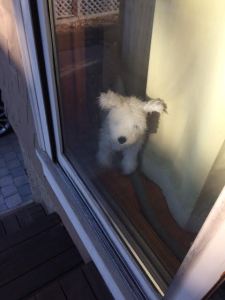 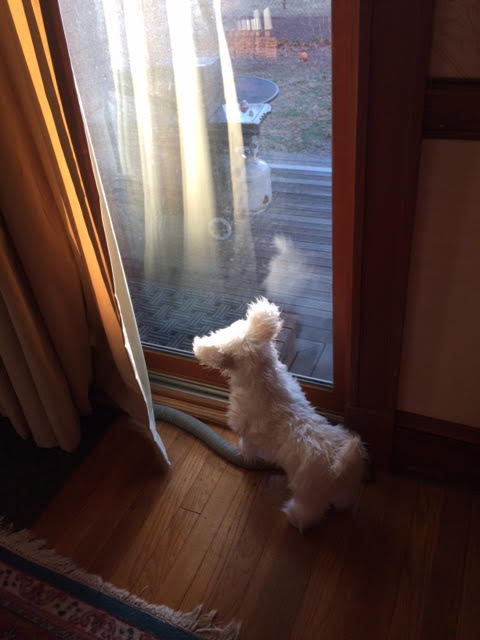 Snowflake doing what she loves to do, watching backyard activities, waiting for someone to come home.

The Library has a collection of books pertaining to pets and their care.  If you are considering adopting a pet, or have any other questions about our materials or local resources, contact us at arlmail02@minlib.net or 781-316-3233.

This entry was posted in Books, Uncategorized. Bookmark the permalink.