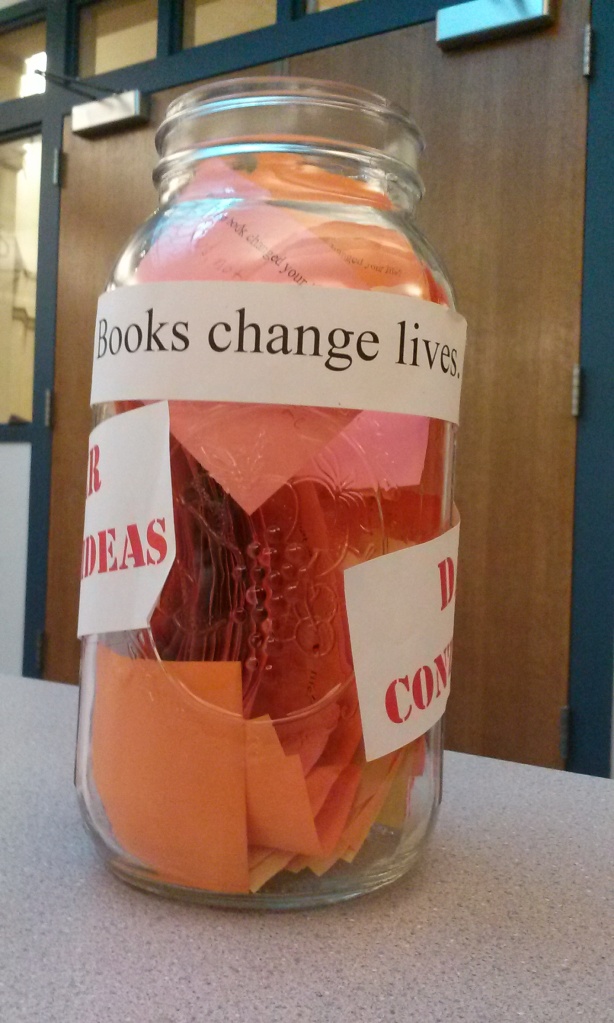 By the time the display came down, the jar was stuffed to the brim with the names of authors and book titles that readers found meaningful.

Here is a list of the contents of this year’s Books Change Lives jar from the Banned Books Week display, in the order in which I unfolded the pieces of paper. Duplicates are not an accident; they mean more than one person entered that book or author. See the word cloud below for a different presentation of the jar’s contents!

These Books Changed Our Lives

Peter Rabbit, A Series of Unfortunate Events, Slaughterhouse-5, Harry Potter and the Deathly Hallows by J.K. Rowling, I Stand Here Ironing (short story), The Maze Runner, Bud Not Buddy, The Secret Life of Bees, My Side of the Mountain, Harry Potter, Exodus, The Book Thief, Tuck Everlasting, Dork Diaries, Moby-Dick, Mountains Beyond Mountains by Tracy Kidder, The Prince of Tides (“great celebration of family – crazies and all!”), The Good Dog, Year of the Bomb, If the Buddha Dated, The Fault in Our Stars, Island of the Blue Dolphins, Dork Diaries, Gone, Diary of a Wimpy Kid, Wonder by R.J. Palacio, Tintin, Smurfs, Harry Potter, Jane Eyre, Percy Jackson & the Olympians series by Rick Riordan, Gone With the Wind, The Fountainhead, Percy Jackson, The Chronicles of Narnia (The Lion, the Witch, and the Wardrobe, etc.) by C.S. Lewis, The Female Eunuch, Reweaving the Web of Life: Feminism and Nonviolence (edited by Pam McAllister), The Dumbest Idea Ever!, Wonderstruck, Sky Raiders, Diary of a Wimpy Kid, Fantasy: An Artist’s Realm, Women in Love by D.H. Lawrence, Catcher in the Rye, Silent Spring by Rachel Carson, King Solomon’s Ring by Konrad Lorenz, Mountains Beyond Mountains, The Tall Book of Make Believe, Collected Poems by Dylan Thomas, Little Women (“fierce strong loving Jo gives inspiration to all!”), The Purpose-Driven Life by Rick Warren, Free-Range Kids by Lenore Skenazy, Tattoos on the Heart: the Power of Boundless Compassion by Gregory Boyle, Gang Leader for a Day: a Rogue Sociologist Takes to the Streets by Sudhir Venkatesh, The Alexandria Quartet by Laurence Durrell, Cradle to Cradle, Jake and Lily by Jerry Spinelli, One Hundred Years of Solitude by Gabriel Garcia Marquez, The Night Before Easter, 1984, The Land of Stories, Rescue Bots, Where the Wild Things Are, Rule of the Bone by Russell Banks, Percy Jackson, The Plague by Albert Camus (“it sent me to jail during Vietnam”), To Kill A Mockingbird, On the Road by Jack Kerouac, Rebecca by Daphne Du Maurier, Island of the Blue Dolphins by Scott O’Dell, The Garden of Eden by Ernest Hemingway, The Alchemist by Paulo Coelho, Diary of a Wimpy Kid, Bad Girls Don’t Die, Fight Club, The Bible, The Grapes of Wrath by John Steinbeck, East of Eden by John Steinbeck, The Boys in the Boat, Mutts, Freckle Juice, The Giver by Lois Lowry, The Great Gatsby by F. Scott Fitzgerald, Ethan Frome by Edith Wharton, Bones, Holes by Louis Sachar, Harry Potter, Hardy Boys, Pride & Prejudice, Famous Five, The New Jim Crow by Michelle Alexander, Drama, Love is Letting Go of Fear by Gerald Jampolsky, What Is The What by Dave Eggers, All The Light We Cannot See by Anthony Doerr, Collected Poems by Jane Kenyon, The Red Tent by Anita Diamant, Rick Riordan’s Percy Jackson books, The Holy Bible, The Catcher in the Rye, Maximum Ride: The Angel Experiment, Harry Potters (1-7 and The Cursed Child), To Kill A Mockingbird, The Mysterious Benedict Society by Trenton Lee Stewart, Winnie the Pooh (accompanied by a drawing of a bear and a honey jar), Behind Closed Doors by Elizabeth Haynes, The Prophecies of Nostradamus, The Mysterious Benedict Society, A Wrinkle in Time by Madeleine L’Engle, Small is Beautiful: Economics As If People Mattered by E.F. Schumacher, Tiger Eyes by Judy Blume, Stone Butch Blues, Harry Potter, This Boy’s Life, The Power of Now by Eckhart Tolle, Test by William Sleator, Animal Farm, Fahrenheit 451, Buckland’s Complete Book of Witchcraft by Raymond Buckland (“I became religious from being an atheist”), Looking for Alaska by John Green, The Bell Jar by Sylvia Plath, Eleanor & Park by Rainbow Rowell, Life on the Other Side by Sylvia Browne

These Authors Changed Our Lives

A word cloud of the titles and authors above. Where would we be without Harry Potter, Percy Jackson, Diary of a Wimpy Kid, Judy Blume? (Created using wordle.net)