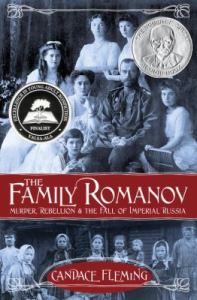 The next book for the NSYA Book Group will be The Family Romanov: murder, rebellion, and the fall of imperial Russia by Candace Fleming. Copies are available now at the Robbins Library circulation desk.

Here’s the review from Booklist:

“History comes to vivid life in Fleming’s sweeping story of the dramatic decline and fall of the House of Romanov. Her account provides not only intimate portraits of Tsar Nicholas; his wife, Alexandra; and the five Romanov children, but it also offers a beautifully realized examination of the context of their lives Russia in a state of increasing social unrest and turmoil. The latter aspect is shown in part through generous excerpts from letters, diaries, memoirs, and more that are seamlessly interspersed throughout the narrative. All underscore the incredible disparity between the glittering lives of the Romanovs and the desperately impoverished ones of the peasant population. Instead of attempting to reform this, Nicholas simply refused to acknowledge its presence, rousing himself only long enough to order savage repression of the occasional uprising. Fleming shows that the hapless tsar was ill equipped to discharge his duties, increasingly relying on Alexandra for guidance; unfortunately, at the same time, she was increasingly reliant on the counsel of the evil monk Rasputin. The end, when it came, was swift and for the Romanovs, who were brutally murdered, terrible. Compulsively readable, Fleming’s artful work of narrative history is splendidly researched and documented. For readers who regard history as dull, Fleming’s extraordinary book is proof positive that, on the contrary, it is endlessly fascinating, absorbing as any novel, and the stuff of an altogether memorable reading experience.”

We’ll meet for our discussion on June 30 at 7pm in the 4th floor conference room. Please note that our meeting is later than usual because I’ll be out of town on vacation.